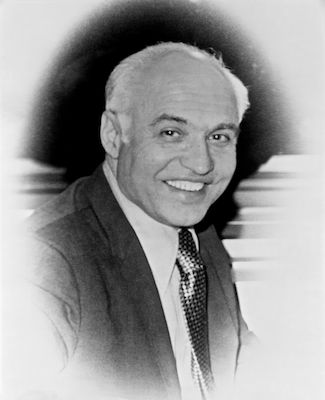 Harry Orbelian, founder and president of the San Francisco Global Trade Council, exemplified the human ideal of triumph over adversity. The child of powerful Armenian parents who were targeted for persecution by the Stalin regime, Harry went from teenage outcast to soldier, prisoner of war, Displaced Person, and U.S. immigrant – all by the age of 28. During the 57 years that followed, Harry’s professional career was nothing short of spectacular, with a significant impact on his adopted city of San Francisco and on all who knew him. Among Harry’s many achievements was bringing about Mikhail Gorbachev’s breakthrough visit to San Francisco in 1990. Among his many awards and commendations, the Ellis Island Medal of Honor, bestowed on Harry for his contribution to strengthening a free society and a prosperous United States, is perhaps the most apt symbol of his rise from immigrant to community leader.

Harry came to the United States on December 21, 1948 as a United Nations Displaced Person, landing at Ellis Island, New York with $10 in his pocket and limited English despite his fluent Russian, Armenian and German. In early 1949, Harry moved to San Francisco and began his first job as a janitor at Gump’s, a famous specialty store with 450 employees and an exclusive international hand picked line. In 1954, during his tenure at Gump’s, Harry also began his successful career in real estate investment. He continued to climb the ladder at Gump’s and was appointed Director of Operations and a member of the Board of Directors. He retired from Gump’s in 1978 — the last to carry the torch of the visionary Gump’s legacy.

Harry joined the San Francisco Chamber of Commerce and created the International Department. During his tenure as Senior Vice President, Harry organized numerous trade missions to more than 50 countries and brought heads of state and foreign dignitaries to San Francisco, including Chinese President Jiang Zemin, Queen Elizabeth, and Secretary of State Colin Powell during the time when Powell was Chairman of the Joint Chiefs of Staff.

San Francisco was thrust into the world spotlight when Harry orchestrated Mikhail Gorbachev’s visit to the city. In 1985 Harry and then Mayor Dianne Feinstein went to Moscow as the personal guests of Gorbachev, newly appointed General Secretary of the Communist Party and President of the Soviet Union. During a private conversation, the ever-persistent Harry told Gorbachev that he would not relent until the Russian leader visited San Francisco. And indeed Gorbachev did visit San Francisco in 1990, with Harry organizing the details.

In 1992, Harry left the Chamber of Commerce, and with the support of Chevron, Bechtel, Bank of America and others, established the San Francisco Global Trade Council. The Council, a nonprofit organization, has been active in promoting international connections between the Bay Area and the rest of the world, developing relationships and commercial ties between local and foreign businesses.

Serving as its President, Harry and the Council hosted events and programs with members of the Bay Area business and diplomatic communities, to promote dialog and business development. The Council worked with the San Francisco Consular Corps, Mayors’ Offices of San Francisco and Oakland, and the Departments of Commerce, State, Justice and Homeland Security to support their international programs. The Council organized trade delegations to China and Russia and a goodwill mission to Cuba.

Harry served on the Northern California Export Council for 20 years, promoting the sale of American products overseas. His extensive relationships with top corporate and, government leaders in this country and abroad earned Harry the praise and gratitude of business and diplomatic circles, and of public officials such as Senator Dianne Feinstein and every mayor of San Francisco since 1956, beginning with George Christopher.

In 2005 at Stanford University, Russian Minister of Foreign Affairs Sergey Lavrov presented Harry with a Medal of Honor from the Russian government (a medal rarely given to non-Russians) for contributing to the development of international relations between the two countries.